To get back into your account, follow the instructions we've sent to your email address.
Didn't receive the password reset email? Check your spam folder for an email from online@giant.sg.
Success

Yes, Proceed No, Revise Quantity
Success
WE OPEN NEW SLOTS THROUGHOUT THE DAY, SO DO CHECK BACK REGULARLY TO SECURE ONE!

Please check your postal code coverage, choose the delivery slot before you shop and complete the payment
within 45 minutes. We will release your delivery slot if you exceed the reservation time given.
DELIVERY
Please enter your postal code to check for an available slot. We’ll help keep your slot for the next hour so you can shop for what you need!


Address: .
Collection Time:
WE OPEN NEW SLOTS THROUGHOUT THE DAY, SO DO CHECK BACK REGULARLY TO SECURE ONE!
Please check your postal code coverage, choose the delivery slot before you shop and complete the payment within 45 minutes. We will release your delivery slot if you exceeds the reservation time given.

Hari Raya Puasa means “Day of Celebration”, and many take this opportunity to perform acts of renewal and purification. Muslims start the day by bathing, wearing their finest clothes and eating something sweet before performing their early morning Eid prayers. Doing good deeds also forms part of the day when people ask forgiveness for any wrongdoings, and donate what they can to charity. 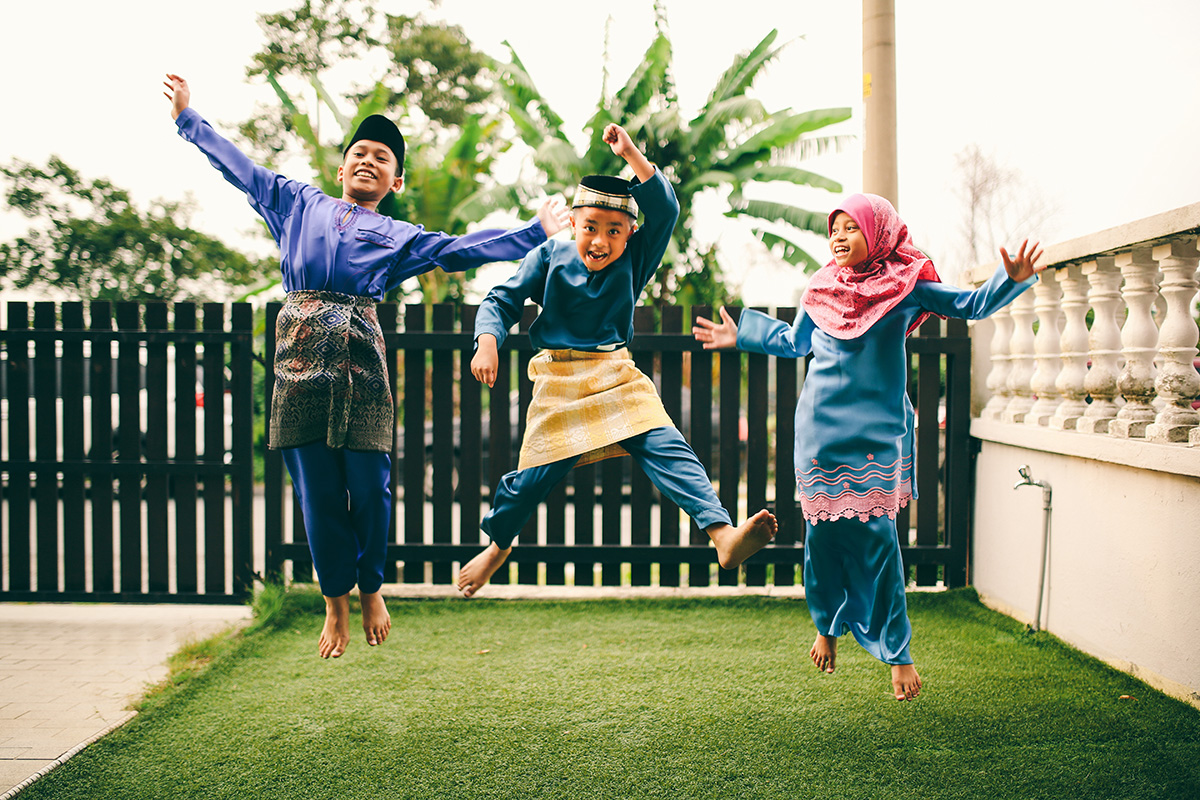 Typically, Muslims in Singapore would be looking forward to the end of the fasting month and the exciting festivities lined up! However, the celebrations this year will be rather different. But this doesn't mean that Hari Raya can’t be equally meaningful or traditions can't be upheld. Even with physical distancing, the spirit of the occasion can still be preserved.

With the countless ways how Hari Raya is celebrated around the world, it would be interesting to find out which among the customs are common or unique to each country.

For Muslims in Singapore, preparations are made before the big day. This would involve cleaning and giving their homes a new look by replacing curtains and sheets, displaying Hari Raya decor or even giving walls a fresh coat of paint.

Meanwhile, halal businesses have set up online delivery services and joined e-bazaars to bring Hari Raya ready-to-eat dishes and other essentials to your doorstep.

Since large gatherings are not possible at this time, families will perform their prayers at home, send WhatsApp greetings to friends and family, and host virtual gatherings via video conferencing apps so they can connect to different households at a time. As children eagerly await their Duit Raya (festive money), banks are offering Hari Raya electronic gift certificates so kids can still receive money via digital green packets.

Hari Raya would not be complete without delicious traditional food. Some of the unique sweet treats served include kueh kueh, cookies and a rose-flavoured drink known as bandung.

Are you curious to know how the rest of world is celebrating Hari Raya? Let’s dive into the unique ways that this special occasion is celebrated around the world.

After a full day of feasting on savoury dishes, it is no wonder that families would offer something sweet and refreshing to clear the palate. Here’s how Muslims in other countries are indulging their sweet tooth.

"Seker Bayram" or Candy Festival is a three-day celebration to mark the end of the month of Ramadan. After the morning prayers, children would honour their elderly and wish everyone a happy bayram. In return for their greetings, they receive traditional pastries such as baklava or candies wrapped in colourful papers. Among the local candies that are still prepared up to this day is the rose lokum. A lokum candy consists of sugar, starch and other fruit flavours but what gives its rich and smooth texture is the effort to stir all ingredients in one direction non-stop for hours until the consistency is just right. 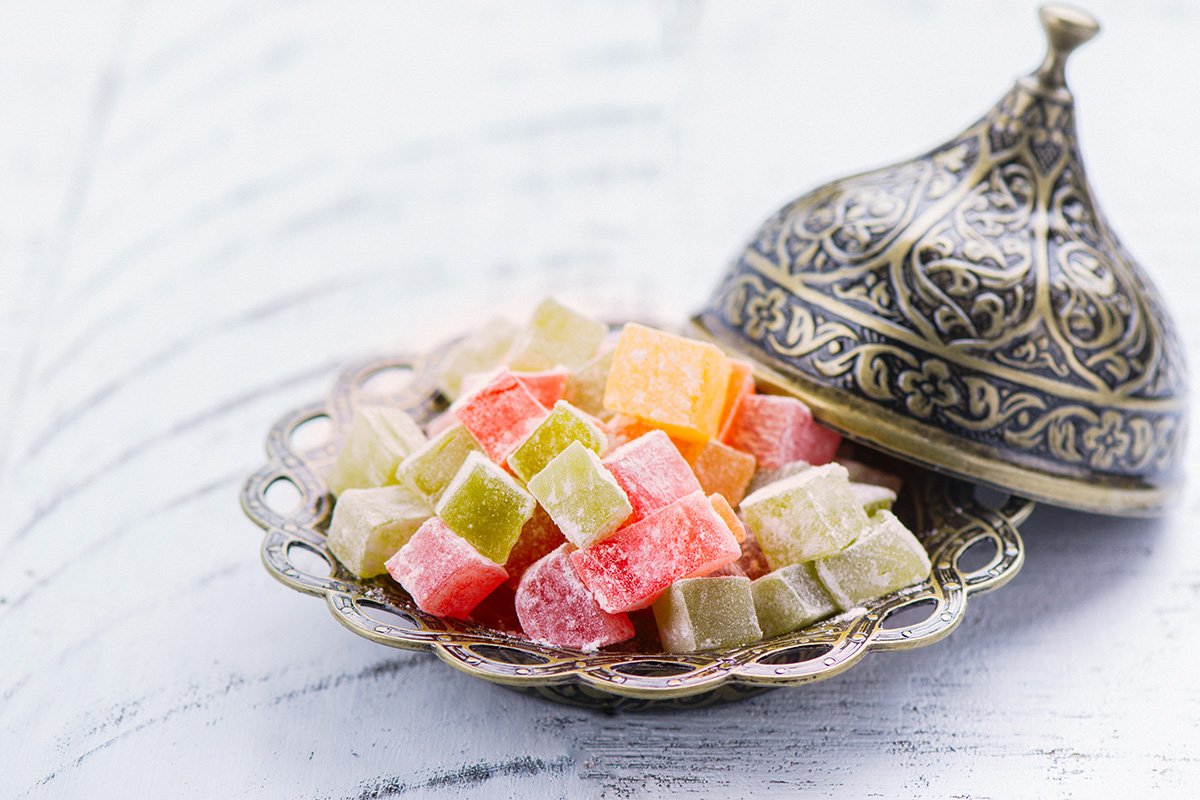 In the last few days of Ramadan, each Egyptian household starts to bake these mouth-watering biscuits called kahk. Its original recipe is said to date back to the 10th century, and many still follow the traditional methods and ingredients to this day. Members of the family take turns in kneading and cutting the dough, stuffing them with honey, nuts or dates, and ornamenting the cookies before layering them in oven trays. Once baked and cooled off, the kahk is dusted in powdered sugar and stored in tin boxes. 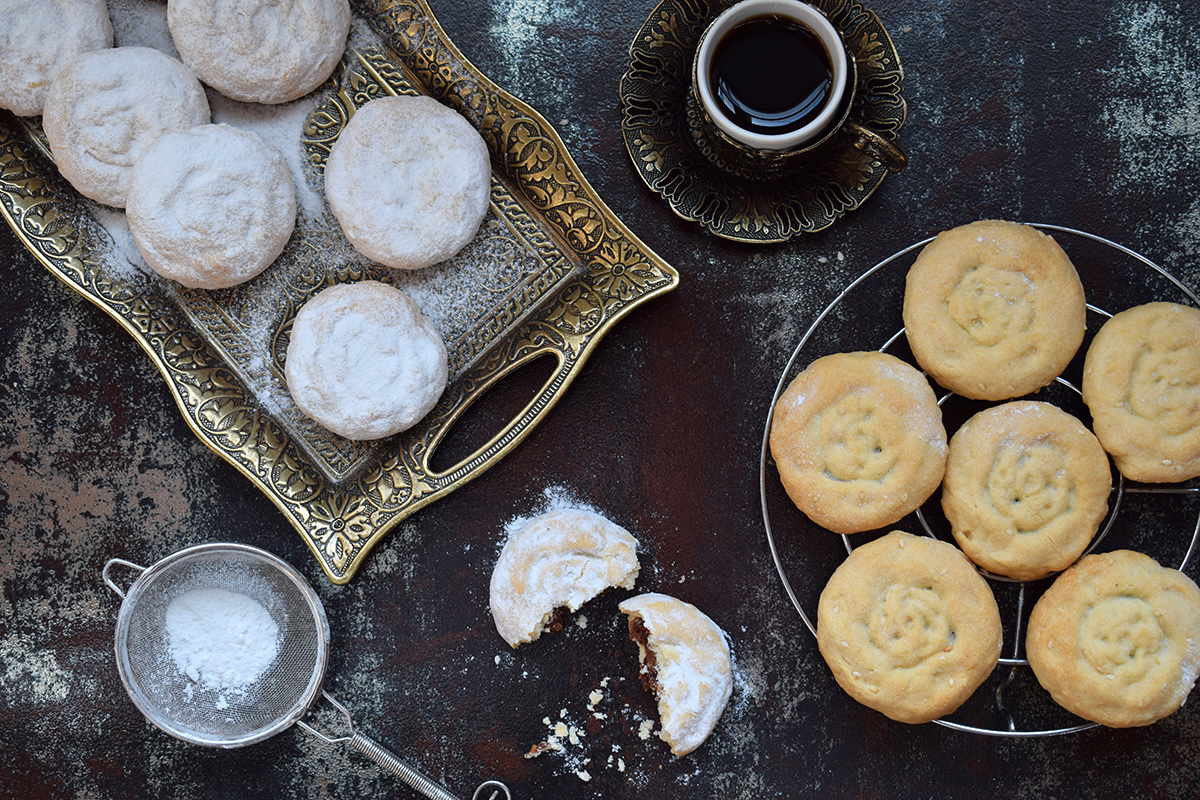 Often called the national dessert of Bosnia, tufahija is made of apples poached in sugar syrup, stuffed with walnuts and topped with whipped cream or crème fraiche. Its sweetness perfectly complements the bitterness of Bosnian coffee and is enjoyed by many all year round but especially during Eid Al-Fitr. 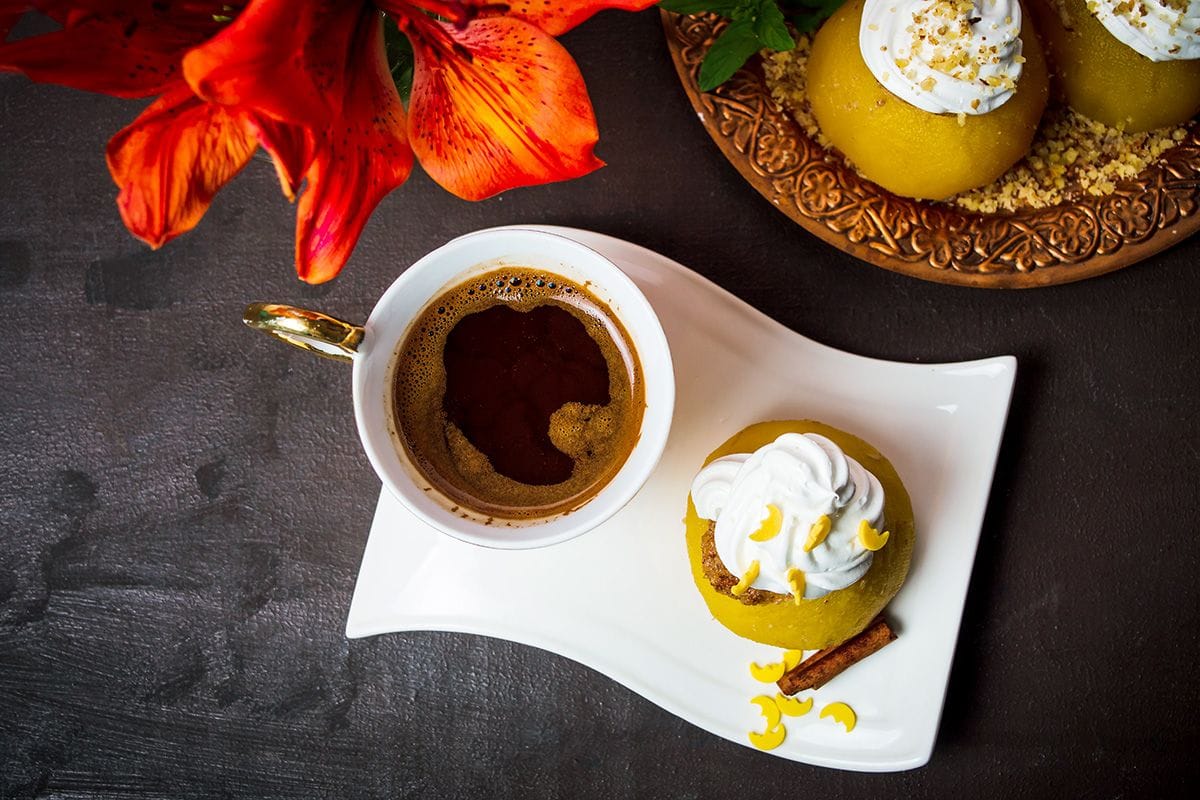 What you’d love about this dessert is how easy it is to make, and you can control the amount of sugar you want to add. You only have to purchase six ingredients: apples, cinnamon sticks, ground cinnamon, walnuts or almonds, plain yoghurt or crème fraiche.

After the Eid prayers, something sweet is eaten for breakfast and accompanied by kahwah, a locally brewed green tea. What makes kahwah tea unique is its aromatic blend of exotic spices such as Kashmiri saffron, cinnamon, cloves, cardamom and at times, milk. It is customary to prepare kahwa tea in a copper kettle and serve with chopped nuts and dried fruits.

To create your own version of kahwah tea from home, look out for these ingredients from your local supermarket: cinnamon sticks, saffron, clove, cardamom, almonds and honey.

A signature pot of gahwa (Arabic coffee) gives off a unique flavour as it can be prepared with several spices such as nutmeg, cardamom, clove or cinnamon. At major holidays such as Eid, gahwa is served together with dates and other pastries. 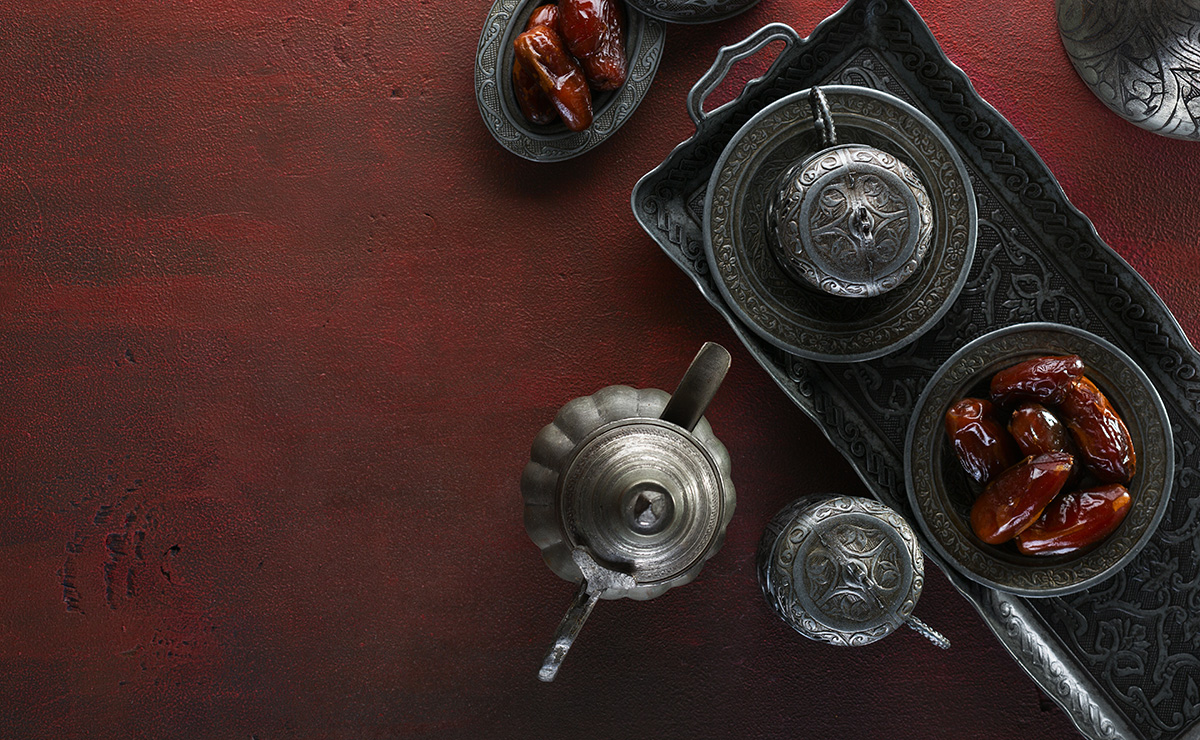 Gahwa is originally served in a special pot called dallah then poured into small coffee cups with no handles called finjan. Dates, meanwhile are absolutely delicious and you can find over 40 different varieties all over UAE.

In Malaysia, festive signature tunes are played on their radios during Hari Raya. The first Aidilfitri song was featured in 1936 and since then, songs with various renditions followed. Generations of Malaysians and even those from neighbouring countries got to know some of these songs by heart. Among the popular classics would be Suasana Hari Raya by Dato’ Sharifah Aini and Menjelang Hari Raya by Datuk DJ Dave.

The songs may be simple in arrangement, yet the tunes are catchy and heart-warming especially after completing the 30-day fasting. 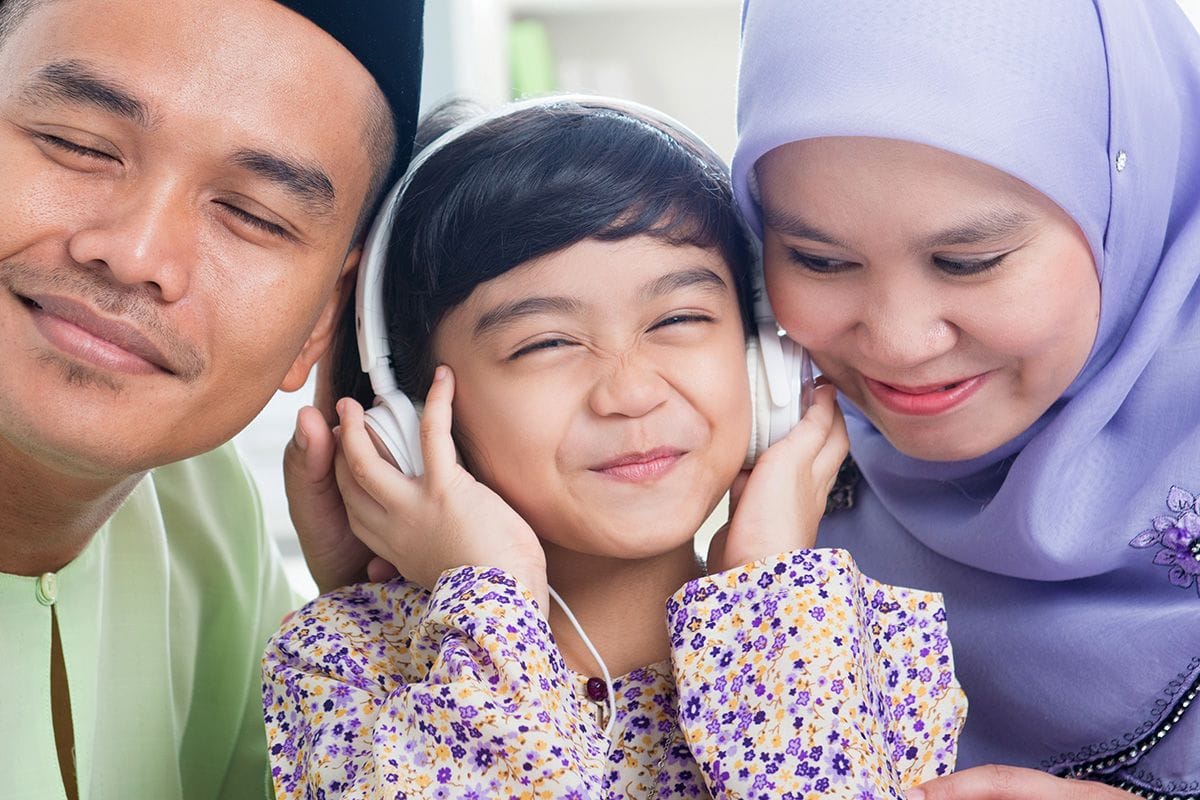 The Yunnan province is home to one million Muslims and houses more than 800 mosques. The residents commemorate Eid by reciting the Quran surahs for the deceased and offer prayers to Sayyid Ajjal, Yunnan’s first governor who advocated Islam, Buddhism, Daoism and Confucianism as a religious policy. He is particularly revered for having promoted religious co-existence and directing the construction of mosques, as well as Buddhist and Confucian temples in Kunming.

Henna or Mehndi art are part of all kinds of joyous occasions, especially for Indian Muslim women. After a month of fasting, they look forward to dressing up and adorning their hands and feet with beautiful henna designs. Mendhi art has great sentimental and cultural importance, and each design has a specific meaning attached to it. Designs can range from simple to complex. Among the popular designs are flowers which symbolise happiness, sun designs which signify immortality and knowledge, lotus for sensuality and awakening of one’s soul, and butterflies which are associated with transformation and rebirth. 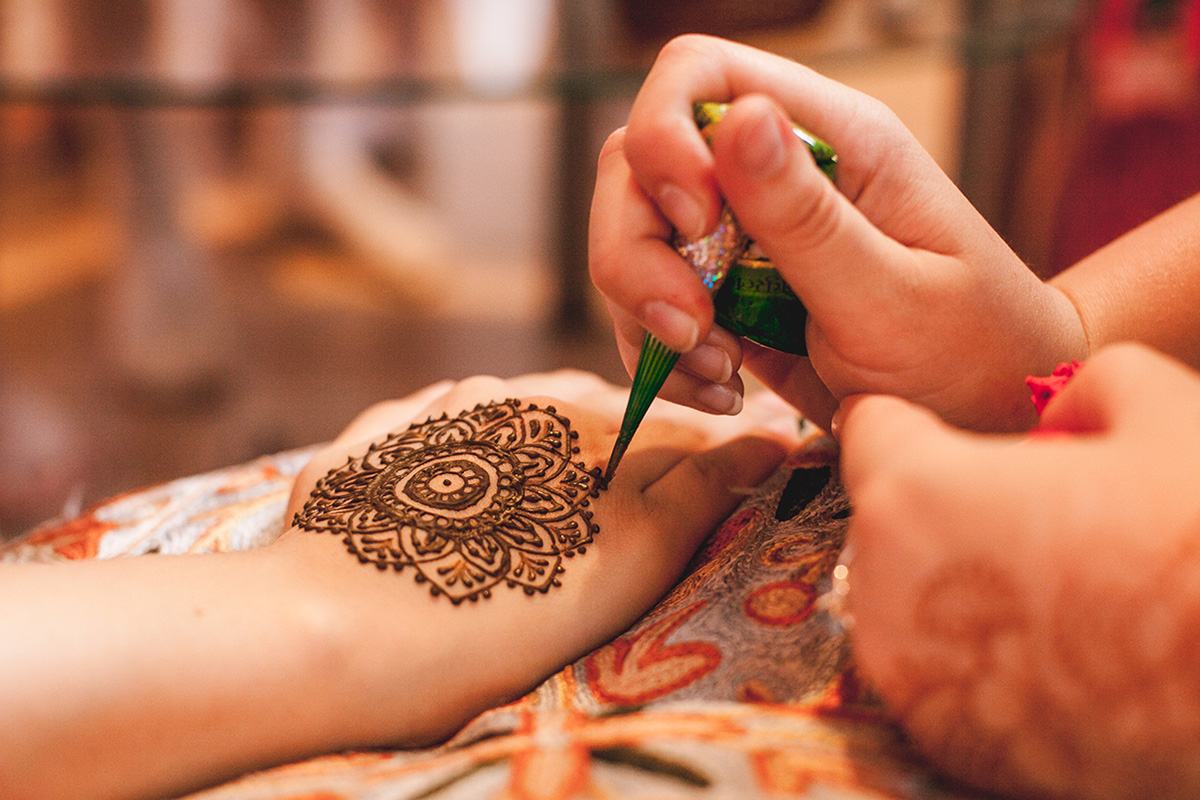 Traditionally, Saudis will dress in their finest clothes, offer special Eid prayers then proceed to enjoy their first daytime meal in a month.

For men, the traditional wear consists of an ankle-length white cotton shirt known as thawb, a head cover called kaffiyeh, and kept in place by a camel’s hair cord known as iqal. In public, women are expected to be fully veiled, wearing a long black cloak known as abayah. A head veil called hijab covers the head while a niqab covers the face.

These days, clothing stores offer a modern take on the traditional abayah by adding hand-crafted details such as beaded florals or embroidered ornaments of the season. 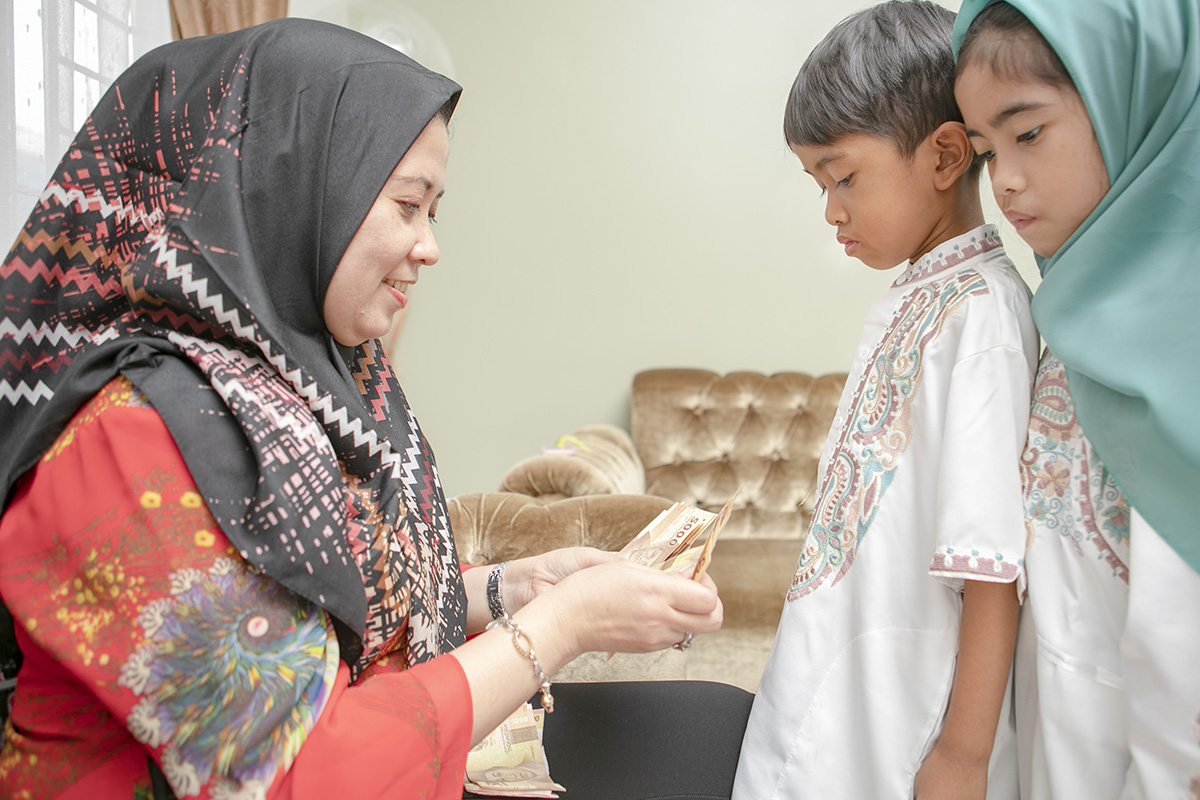 Locally known as Lebaran, Indonesia is known for celebrating the end of Ramadan with a lot of giving and receiving. Children await their salam tempel which are usually crisp, fresh-from-the-bank money given by their elder relatives. While companies bestow the one-month bonus to their employees, there would also be increased charity work and donations through zakat.

As millions of Muslims mark the end of the Month of Ramadan, it is interesting to know the subtle differences in traditions which are unique to each country and culture. This gives us a new appreciation for the diversity within the Muslim community and encourages us to try new recipes from other Muslim cultures to add an element of surprise to our own celebrations. No matter what you're whipping up for your family this Hari Raya, you'll find everything you need at Giant!

May this Hari Raya bring abundance, peace, happiness and good health to you and your families. 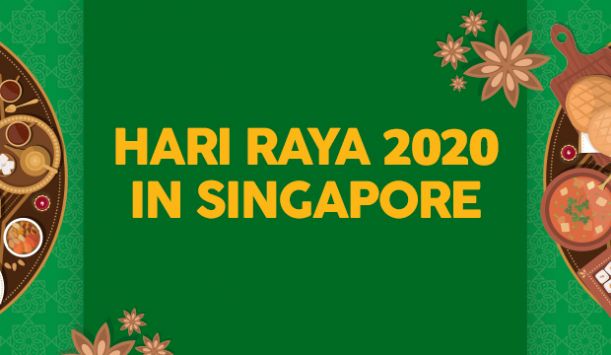 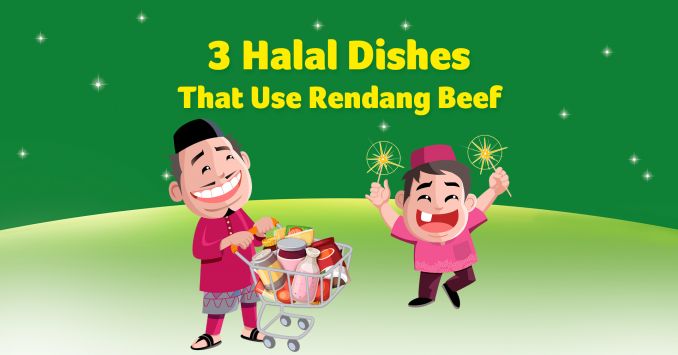 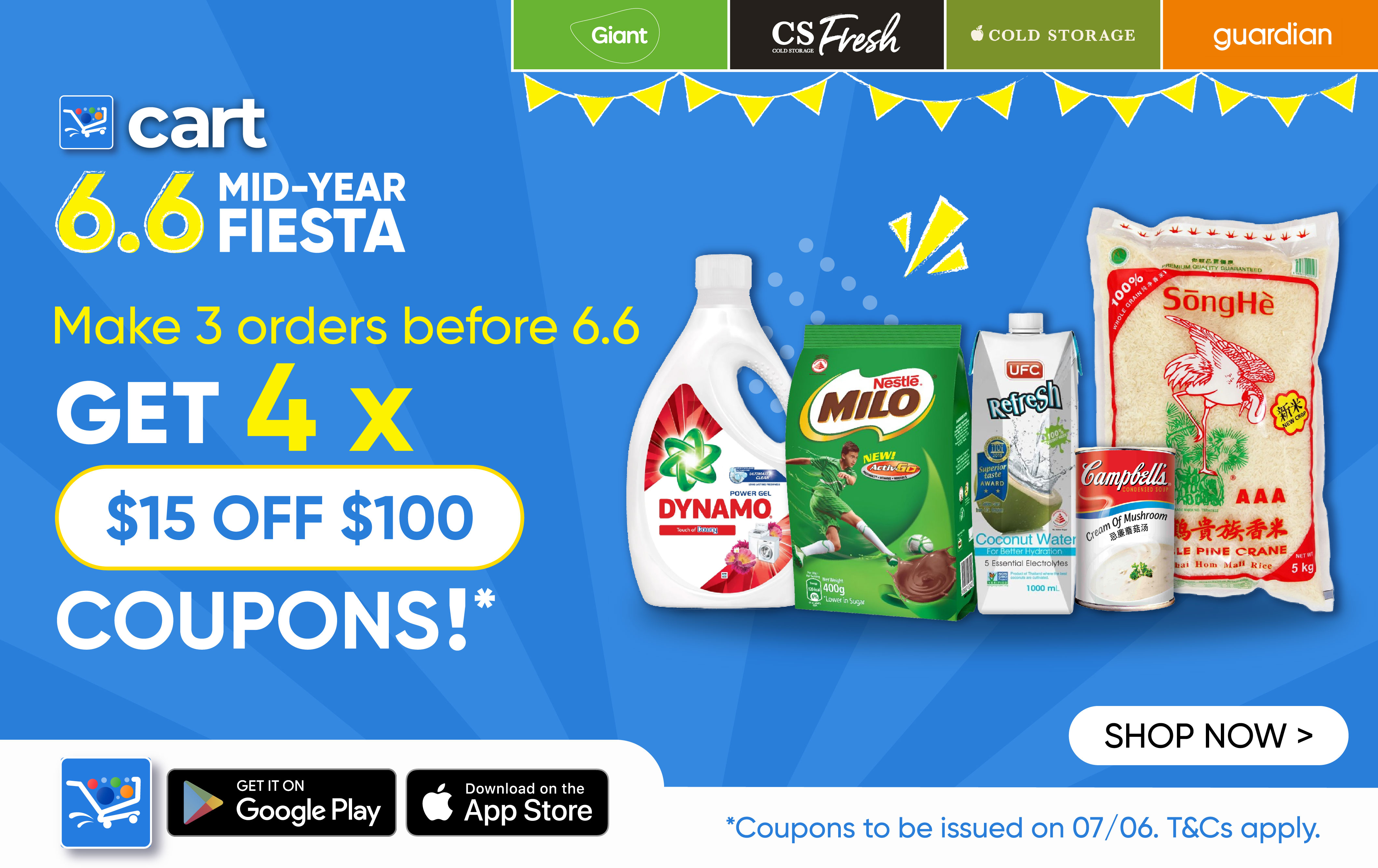