DELIVERY
Please enter your postal code to check for an available slot. We’ll help keep your slot for the next hour so you can shop for what you need!

Please enter your postal code to check for an available slot. We’ll help keep your slot for the next hour so you can shop for what you need!

Look inside your cupboard. There’s probably a packet or cup of instant noodles somewhere there. Instant noodles are popular because they’re convenient, inexpensive, and easy to cook.

Nissin, of course, is one of the most well-known instant noodle brands. As part of our campaign to search for the best instant noodles in town, we’ve asked three food tasters to gather and judge which is the best among Nissin’s line of noodles. Our tasters, Hakeem, John, and Simran, were in for a treat when they rated the noodles in terms of taste, consistency, and overall experience.

Here are 10 Nissin instant noodles, ranked from the least impressive to the most appetising.

Our reviewers didn’t particularly like the Nissin Cup Noodles Mushroom Chicken Flavour. Simran wasn’t too impressed with the taste. “Maybe there wasn’t enough seasoning,” she said.

However, Simran eventually grew fond of the egg bits, mushrooms, and vegetables in the broth, which added flavour to the mix. She pointed out: “The mushroom flavour is quite bold here, which masks the artificial chicken taste.”

While John and Hakeem felt Nissin Demae Ramen 出前一丁 Chicken Flavour wasn’t deserving of a high score, Simran thought it wasn’t that bad. “It provided just the right amount of taste and was filling.”

However, the vegetables in the mix were too bland for her taste. “It would have been better if the veggies added real flavour to the soup,” she said.

With “just the right seasoning,” the Nissin Cup Noodles Black Pepper Crab Flavour was overall a satisfying meal for Hakeem. At first, Hakeem wasn’t sure how he’d like the taste. But eventually, he thought “the black pepper crab flavour was likeable and not too strong.”

A number of people may count Nissin Cup Noodles Cream of Chicken Flavour as one of their favourite noodles, but not John. He called it “too milky” and went on to say that “the milkiness somehow compromised the broth’s flavour.”

“I actually like the soft texture of the noodles, but the creaminess can be off-putting,” he said.

But our resident noodle expert found this variant not much for his liking. “It’s rather bland and salty.”

According to Hakeem, it would have been great if its broth were packed with stronger flavour.

The Nissin Cup Noodles Laksa Flavour packs into one small cup the taste and aroma of laksa leaves and tau pok. “It had a fairly authentic flavour; plus the aroma of the laksa was totally inviting,” Hakeem gushed.

“I definitely would want a piping hot cup of these noodles during rainy days,” he added.

The Nissin Cup Noodles Roasted Beef Flavour was one of the critics’ favourites from our lineup. It tasted so good for Hakeem that he gave it 4 out of 5 across the board, including broth flavour and noodle flavour.

“It had a hint of spiciness, which was exactly what I was looking for,” Hakeem said.

Asked why he’d purchase more of this variant at Giant soon, Hakeem said, “the noodles’ right blend of spiciness simply blew me away.”

Simran and John both gave this variant favourable scores as well.

It only took one slurp for John to get hooked on the Nissin Cup Noodles Tom Yam Seafood Flavour. He really loved the “right blend of sweetness and spiciness” of the broth and added that what sets apart the Tom Yam noodles from others is its soft texture.

“The noodles’ texture was neither droopy nor too firm,” said John.

“I loved it. I really liked the strips of seaweed. They added another layer of richness to the soup,” he said. “Even the noodles had a right chew to them. I’d get two or three more packets of this variant once I visit Giant,” he added.

Definitely, Nissin Japanese Ramen Tokyo Shoyu is a nod to Nissin’s long and colourful history as a Japanese brand.

“It stays true to the flavour depicted on the cup. This is how you cap off a hard day’s work,” Simran gleefully noted.

Like our noodle experts, you too can have your fill of Nissin instant noodles—at great, great prices. 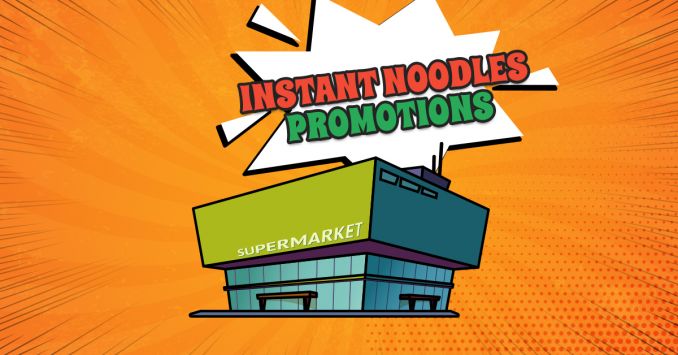